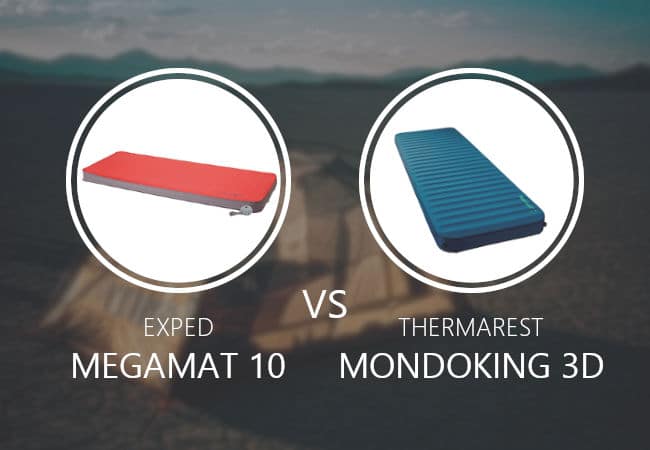 When looking for a large, 4-season, durable self-inflating sleeping pad it’s very common to not being able to decide between Exped Megamat 10 vs Thermarest Mondoking 3D. In this article, I will cover everything you need to know for both sleeping pads, so you can choose the one suitable for you.

Specs of Megamat 10 vs Mondoking 3D

First things first, both sleeping pads are quite heavy and bulky for backpacking, they mainly made for car campings. Although the weight and package size are not the first priority for car camps, I can say that Therm-a-Rest Mondoking is a superior model here.

Although they both offer different sizes, Exped Megamat is the winner in the size department due to its variety of sizes.

But let’s compare their Large sizes: With the dimensions of 77″, they offer the same length and it’s more than enough if you’re not taller than 6′ 4″. But for the width Exped Megamat is the superior one, with the 30.3″ of shoulder girth, it offers 5″ wider space than Therm-a-Rest Mondoking 3D.

Also for those who’re camping with the significant other, unlike Thermarest Mondoking, Exped offers a twin model, check out the latest prices of Exped Megamat Duo.

Insulation of sleeping pads is measured by a term called R-Value. It is a measure of the ability to resist the flow of heat, so the higher the R-Value the more insulation you will get.

With that being said, with the R-Value of 9.5 Exped Megamat 10 is the clear winner here since Therm-a-Rest Mondoking‘s R-Value is 7.0.

But to be honest, since they both offer a really high R-Value, it shouldn’t be a consideration point unless you’re going for extreme cold camping.

To understand the R-Value better, here is a chart of R-Value to Temperature Rating.

Comfort is an extremely important issue especially for side-sleepers and for those who have bad backs. And if you’re one those people it’s highly recommended to go for a sleeping pad that is at least 3″ of thick, so you wouldn’t feel the ground when you lay down on the pad.

But luckily both sleeping pads are extremely thick, the cushion depths of Exped Megamat and Therm-a-Rest Mondoking are respectively 3.9″ and 4.25″. So both are suitable for bad backs and side sleepers.

For the comfort comparison of Exped Megamat vs ThermaRest Mondoking, there is not a clear winner, they both offer bed-like comfort, but I must say that people tend to find Exped Megamat more comfortable.

Since they are both self-inflating sleeping pads, they are quite easy to set up, just lay it on the ground and open the valve, after roughly 15/20 minutes it will be inflated and ready.

However, neither will be fully inflated, if you like it firm, you need to pump little air to adjust it to your desired level of firmness.

You don’t need to use your breath to inflate either of the pad (which would cause mold and end up screwing your pad in long term), Exped Megamat comes with a small pump, Therm-a-Rest Mondoking, on the other hand, comes with a pump sack.

Since it has a valve specifically build for deflating big amount of air, it’s a lot easier to deflate and pack down Exped Megamat. Also, Exped Megamat features a small nub on the inflation valve to deflate the pad just a little bit to adjust the firmness (it’s placed on the left valve as you can see at the picture above).

One important note: If you go with the newer and improved model of Therm-a-Rest Mondoking with Twinlock, the two valves of the pad are not the same; left one is specifically made for inflation, and the right one is for deflation (which can open all the way to decrease deflation time and ease the process). So if you go with the Twinlock model I must say that both sleeping pads are the highest quality and one is not better than the other.

Also, If you’re camping with a partner, Thermarest has a gear called Synergy Coupler to combine two Thermarest Mondoking into one double sleeping pad.

Check the latest price of Therm-a-Rest Synergy Coupler on Amazon.

Since they’re both self-inflating (Half Air/Half PU) sleeping pads they need air to do their job. And when they’re damaged, they’re useless. Therefore both come with a repair kit.

Since they’re most likely to get the damage from the bottom (due to rocks and sticks on the ground), Megamat’s and Mondoking’s bottom are respectively made of 70D and 75D Polyester, they’re both extremely durable. It wouldn’t be fair to say one of them is superior when it comes to durability comparison of Exped Megamat vs Thermarest Mondoking.

Due to the insulating material used in them, some sleep pads make a lot of noise when you move during the night. And most people don’t take sound into consideration when choosing a sleeping pad and they end up hating the pad and get a new one.

If the sound doesn’t bother you much, this may not be the first priority for you, but if it’s a deal-breaker for you, you should know that Exped Megamat is quieter than Thermarest Mondoking.

Exped Megamat is one of the most popular 4 seasons sleeping pad on the market, and its popularity is not based on great marketing, it’s based on its fantastic features, such as insulation, comfort, ease of setup, etc.

It has an R-Value of 9.5, if you don’t know what that number indicates, it basically means that this sleeping pad can keep you warm even in the most freezing/deadly conditions (It can keep you warm down to -54°F)

If you’ve ever done cold weather camping, you probably know how important the sleeping pad is, but if it’s your first time, you should know that in the freezing cold, your sleeping pad and sleeping bag will be your best friend. Therefore it’s really important to go for a sleeping pad that has a high R-Value.

Exped Megamat is a self-inflated sleeping pad, it doesn’t require an extra blowing, you just need to let it sit for 15 minutes and it’s ready to go, but if you like it firm you can just pump it 20/25 times to fully inflate the pad.

Unlike most of the pads on the market, Megamat features two valves; one for inflation and one for deflation. On the inflation valve, there is a little nub to release the air a little bit to adjust the inflation of the pad the way you like it.

It comes with a stuff sack, a repair kit, and a pump.
Fun fact: you might think the pump is unnecessary but, blowing the pad with your breath causes mold which basically is the cancer of sleeping pads. So if you want to increase longevity, always use pumps for sleeping pads.

Dimensions of the pad are 77.6″ x 30.3″ so if your not a fellow taller than 6’4″ it offers more than enough space. And it’s a really comfortable sleeping pad, also, since it’s 3.9″ thick you don’t bottom out on this pad and don’t feel the ground which is great for side-sleepers and bad-backs as well.

Exped Megamat 10 LXW weighs 99,7 oz (pump and sack included), and it packs down to 31.1″ x 9.8″. As you might have guessed by now if you’re not Arnold Schwarzenegger the pad is not for backpacking. But if you’re going for a car camping it shouldn’t be a big problem.

It has a sidewinder sack, which means it opens from the side, and the sack offers a great room, so you wouldn’t struggle and fight with the pad to get it in and get it out of the sack.

Check the latest price of Exped Megamat on Amazon

Therm-a-Rest Mondoking is the most preferred car camp sleeping pad on the market for those who are fond of comfort.

It’s a self-inflating sleeping pad, therefore, when you’re at the campsite, just put your pad on the ground open the valves, and when you’re done with other preparations (such as pitching the tent) your pad will be ready waiting for you (it generally takes 15 minutes to be inflated). You might need to pump a little more get it up to your desired level of firmness though. It also comes with a pump sack so you don’t need to blow it with your mouth.

The great thing about this pad is, it’s got an R-Value of 7.0, you can use this pad even in the coldest temperature you can imagine, it will still keep you warm.