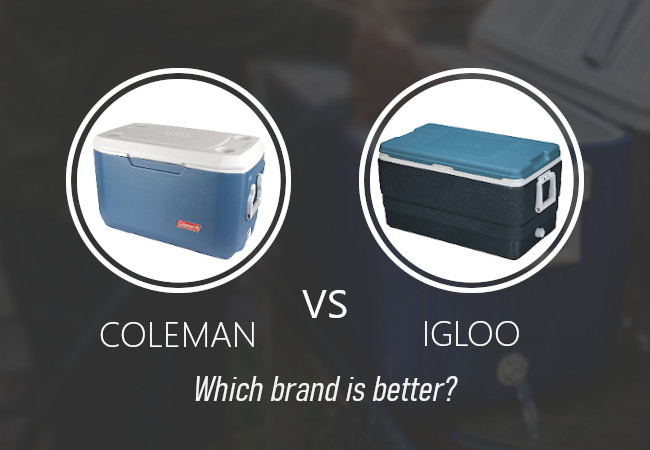 When you’re in the market looking for a budget-friendly cooler it’s very common to be torn between Coleman vs Igloo. Both brands have features that are superior to the other. So to help you pick the most suitable cooler for you I will be covering everything you should be looking for in each brand.

If you’re just getting started with camping or any other outdoor adventures, you shouldn’t have to go out and buy the most expensive stuff, also you shouldn’t buy the cheapest ones as well.

You should be looking for budget-friendly gear that offers good features, and Coleman Xtreme offers the perfect balance between price and features.

Coleman Xtreme series has several different sizes, here are the most popular and handy ones with their specs and key features:

But in order to get 5 days of ice retention with that price tag you need to sacrifice some features as well. And the biggest sacrifice here is the materials it’s made of.

Coleman Xtreme is not the most durable cooler out there, when compared to YETI for example, you can sit on YETI or even jump on the YETI, you wouldn’t cause any damage, but if you’re a big fellow it’s best not to use Coleman Xtreme as a spare chair, it would bow after a while. Coleman Xtreme Series’ Lid supports up to 250 lbs.

Another downside of the series is they don’t have anti-slip feet, so if you don’t place the cooler tight, it would slide around in your trunk.

Enough with the downsides, right?

So let’s talk about the good stuff, Coleman Xtreme features nice and deep built-in cup holders on the lid, that is a very cool feature, most of the other popular coolers out there such as Igloo Maxcold or YETI Tundra doesn’t feature a built-in cup holder, with most of them you even need to purchase a holder accessory that is attachable to the cooler and they’re usually sold separately.

Another cool thing about the Coleman Xtreme series is they feature a scale on the lid which is a very handy feature especially for fishermen out there.

The handles of the Coleman Xtreme series have a rubber coating around them, this is not a must-have feature, however, it allows you to carry your cooler more comfortably.

Another convenient gear for those who are looking for a budget cooler is Igloo Maxcold, this hard cooler has several sizes as well, here are the specs of the most popular and convenient sizes.

Igloo Maxcold series is advertised as 5 days of ice retention, but although it depends on many factors, I must say that if you want 5 days of ice retention you really need to be prepared before the trip (by cooling inside of the cooler before the trip and by filling it with already cold beverages, etc.) but if you’re already planning 3-day or 4-day trips, it would do the job perfectly well.

Funny thing is, not all sizes of Igloo Maxcold have the same design, all of them (50qt, 70qt, 100 qt sizes) have drain plugs, swing handles, tie-down loops. But additionally:

Igloo Maxcold series are durable enough to be used as a spare chair, considering their price they’re is really sturdy.

The series has a drain valve, for those who didn’t have a cooler before, it’s a very important feature, do not even think of getting a cooler that doesn’t have a drain plug. And I must give credit to Igloo Maxcold’s drain system, it has a screw-on tap it’s a very convenient plug.

So what are the downsides of Igloo Maxcold Series?

Both Coleman and Igloo have several types of coolers, but to help you to get a better idea of the brands, I’ve compared their most popular and convenient models of the brands, Coleman Xtreme and Igloo Maxcold.

Coleman Xtreme series have a very even design, you almost get the same width at the bottom as at the top, and it makes it much easier to fill and stack the cooler.

Igloo Maxcold series, on the other hand, has a slightly tapered design wider at the top more narrow through the bottom, but it’s still convenient enough for easily organizing your perishables.

Beauty-wise, I must give credit to the Igloo Maxcold series, compared to the Coleman Xtreme series, Igloo Maxcolds look much better, and they look more high-end.

But beauty is a relative concept, so here is a side by side picture of both coolers:

As I’ve mentioned above, both coolers are advertised as 5 days ice retention coolers, but in this department, I have to give credit to Coleman, it does a better job when it comes to keeping your beverages cool for a longer time.

Will Coleman Xtreme and Igloo Maxcold keep your beverages cold up to five days?

Yes, if you pre-chill the cooler and if your beverages are already cold when you stack them in the cooler, they will keep your beverages cold up to 5 days (depends on a lot of factors though, such as outside temperature). BUT with the same conditions, ices in the Coleman Xtreme starts to melt later than Igloo Maxcold.

When the same sizes of the Coleman Xtreme and the Igloo Maxcold compared, the difference in weight is negligible.

This weight might be too much if you are going to carry it alone. In this case, consider a wheeled cooler (I will get into details below).

Even though it is unimportant as you won’t be carrying your wheeled cooler, it is also worth noting that wheeled coolers are heavier than regular coolers.

First things first, since both are budget coolers you shouldn’t be expecting a very robust / bear-proof cooler, if that is a really important factor you should chip in a little more and go for the YETI Tundra (read my review or view on Amazon).

But if you’re on a budget, you can use both brands’ coolers for years if you’re not planning extreme outdoor adventures, you might need to change the hinges from time to time though, but the good thing is, generally both brands use the same hinges and drain valves for most of their different models, so it’s very easy to find the spare parts.

Features Comparison of Igloo vs Coleman

Both Coleman Xtreme and Igloo Maxcold series features a drainage system, and both coolers’ inside are angled towards the drain, so you don’t need to lift one side of the cooler to drain the water.

But I must give credit to Igloo here, because it has a much better drain plug design, with screw-on tapping it’s much easier to use. Unfortunately, even though the Coleman Xtreme drain plug does the job it’s not as convenient as Igloo Maxcold’s drain system.

Neither Igloo Maxcold nor Coleman Xtreme series comes with a gasket around the lid, so they’re not leak-proof, once they turned upside down they both will leak, so when you’re arranging your trunk before leaving for your trip, make sure to tie down your cooler tightly.

Gaskets are not used only for leak-proofing though, since they prevent the hot air from coming inside, they’re an important factor for ice retention as well, so if you want to leak-proof your cooler and increase the ice retention performance you can always make your own gasket. It’s important to mention that high-end coolers such as YETI Tundra (read my review or view on Amazon) or RTIC Ice Chest Coolers (view on Amazon) come with gaskets.

If you didn’t have any cooler until now, you must know that coolers are heavy gear when they’re filled with cans and ices, a 50 qt cooler fully filled with ice and cans can weigh around 80 lbs or maybe even higher (depends on what you put in it), and that is a very high weight for one person to carry, therefore wheeled coolers come in very handy for those who don’t have an extra hand.

Igloo Maxcold series on the other hand doesn’t feature a wheel, if you want an igloo cooler with a wheel you need to increase your budget a little bit, and go for a more high-end Igloo cooler such as Igloo Trailmate, or go for a less quality cooler that doesn’t offer days of ice retention such as Igloo Ice Cube 60.

Here are the best options for Igloo wheeled coolers:

If you have enough budget, Igloo Trailmate is not only very easy to carry around but also has a lot of cool features as well.

Check out the latest price on Amazon

If ice retention is not an important factor for you and if you really need a wheeled cooler, Igloo Ice Cube 60qt would be a good option for those who’re tight on the budget.

Check out the latest price on Amazon

As I’ve mentioned before, since coolers are budget coolers they don’t feature non-slip feet, so they can be annoying sliding around your trunk.

But the good thing is you can always make your cooler non-slip yourself very easily with an Adhesive Anti-skid Pad.

If you need a cooler only for your backcountry camping trips then not having a tie-down slot might not be a deal-breaker for you, but if you’re a boater or more extreme outdoor enthusiast you might need tie-down slots.

Igloo Maxcold series have one tie-down slot on each handle (not super durable but still does the job), Coleman Xtreme series on the other hand doesn’t feature tie-down slots.

Accessories for Igloo and Coleman Coolers

One way to increase ice retention performance is by using freezer blocks, they work more efficiently when they’re combined with regular ice cubes.

8The thing you should consider here is to select the proper size for your cooler, so look at the interior dimensions of your cooler before you choose the proper Freezer Block, so it would fit perfectly to the bottom of your cooler (these freezer blocks generally put at the very end of the cooler for better performance).

My recommends for freezer blocks is Igloo Maxcold Freezer Blocks and YETI Ice.

To keep your food and dry goods separately you will need a basket, although it’s not a must-have accessory, it definitely helps a lot in organizing your perishables.

But again buying the right size is very important, so make sure to look at the dimensions of the basket and your cooler before you purchase one.

My recommendation for cooler baskets are Igloo Cooler Baskets.