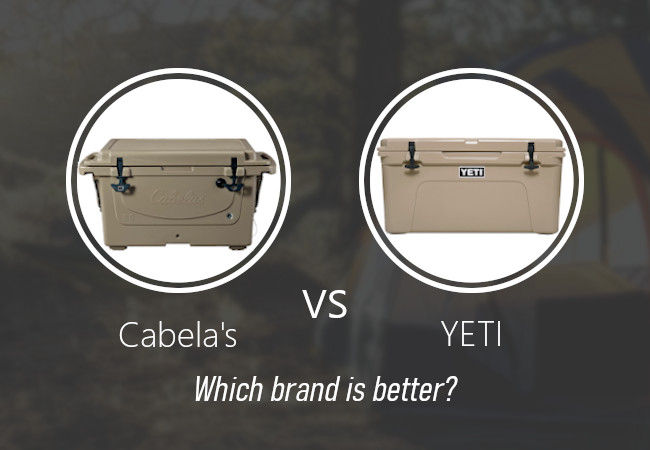 Cooler is the men’s best friend outdoors, and it’s common to get confused on what to get with so many brands out there. In this comprehensive comparison of Cabela’s Cooler vs YETI, I will get into the details to help you to choose the suitable one for your needs.

In summary, both YETI and Cabela’s Hard Coolers provide great ice retention and they both are bear-proof, high-end coolers, differences are the small features such as YETI’s Tie-down slots or Cabela’s integrated bottle opener T-Latches. That is not the case with soft coolers though, YETI makes high-end, durable soft coolers that offer a minimum of a day of ice retention whereas Cabela’s soft coolers are less durable and offer lower ice retention capacity but they’re more budget-friendly.

Quick Histories of Both Brands

Although YETI is the market leader now, the brand wasn’t even in the market up until roughly 15 years ago. The brand was founded by two outdoor enthusiast brothers in 2006 and because YETI coolers offer the ‘whole package’, the brand, now is the decision-maker in the cooler market.

Cabela’s history goes back to the ’60s and unlike YETI, Cabela’s is not only popular for its coolers, but the brand also offers a wide range of outdoor products.

Cabela’s history starts in 1961 with 45$ purchase of 3000 hand-tied fishing lures and in 60 years, it grew into a 3 billion-dollar company. It is now one of the biggest players in the outdoor, fishing, and sports market.

The brand is famous for its coolers and therefore offers a size and type for every condition. So here are the most popular series of YETI.

The YETI Tundra series is the most popular and convenient hard cooler series of the brand. If you hear someone talking about his or her YETI Cooler there’s a big chance he or she is talking about a YETI Tundra.

Although it depends on a variety of factors the Tundra series offers ice retention for up to 5 days.

Due to its construction and the material it’s made of, the YETI Tundra Series are bear-proof, you can use it as a stand or as a chair without worrying about bowing the lid. And of course, the coolers, therefore, are perfect for extreme outdoor adventures.

From 20.8 quarts to 402.4 quarts of YETI offers a big variety of hard cooler sizes. Due to their convenient sizes and capacities, the most popular ones in the line are YETI Tundra 45 and 65 (my review or price on Amazon).

Fun fact: Unlike most brands, with YETI coolers, the number at the back doesn’t refer to the capacity of the coolers, YETI Tundra 45 actually offers 37.6 quarts of volume.

For those who’re in the market for soft coolers, the YETI Hopper Flip series is the most popular and convenient soft cooler series in YETI’s line.

Among the other soft coolers in the industry YETI Hopper Flip series stands out by providing great ice retention, durability, and cool features with a low weight.

Although the Hopper Flip series are not bear-proof like the Tundra series, they still are considered very durable, and mostly used in extreme outdoor sports where you need a light cooler to keep your perishables fresh and cold, like kayaking or doing ATV safari.

DryHide Shell: Both the interior and exterior fabric of the coolers are made of DryHide Fabric, not only it’s highly durable but also the liner is anti-microbial, mildew resistant, FDA food-grade.

ColdCell Insulation: Hopper Flip Series features ColdCell foam insulation, and offers up to 40 hours of ice retention (which is considered very high for a soft cooler).

HitchPoint Grid: Hopper Flip Series features tie-down loops for both easily attaching anything you want to the cooler (such as Molle Bottle Opener) and tying down the cooler to your vehicle. Also, it’s important to mention that Hopper Flip 12 features 3 grids, Hopper Flip 18 on the other hand features 4 grids (check out my extensive review of YETI Hopper Flip 12 vs 18).

From 25 qt to 100 qt the series offers several different sizes, but the biggest you can go with Cabelas is 100 qt. If you need a bigger one I suggest you take a look at YETI Tundra 125 (actually offer 121.4 quarts).

Even though it depends on lots of factors, it’s fair to say that Cabela’s Polar Cap Equalizer series provide ice retention for up to 5 days. But that does come with a price, Cabela’s coolers have very thick walls (that has foam inside for insulation), and therefore they take up a big space in your trunk, and built-in handles don’t help at all, they even widen the space the coolers take up.

But if you’re looking for a “let’s say a 60 qt cooler”, I’m guessing how big of a space the cooler is gonna take up wouldn’t be the first thing that you consider. So let’s dive into what you should be looking for, the features of the cooler.

But for those who’re on a budget and looking for a budget-friendly cooler here’s the key features and specs of Cabela’s Soft-Sided Coolers.

Coating: The Soft Coolers of Cabela’s features thick PVC outer coating to increase the ice retention (not very good at ice retention though).

Pockets: The cooler has an external mesh and zipper pockets to keep your belongings.

Carrying: For easy portability, the Cabela’s Soft Sided Coolers have a padded shoulder strap and a webbed carry handle.

The color might not be your first priority when looking for a cooler, but there is a big difference between YETI and Cabela’s Coolers in the color department.

Before jumping into the color options of the brands, one thing I should mention is, since dark surfaces get much hotter when they’re directly exposed to the sun, lighter color coolers are better in terms of ice retention.

Here are the color options for YETI Tundra 45 (the most popular size of the series). You can check the latest price and availability on Amazon below.

Here’re the color options for Cabela’s Coolers, Orange is an option for only 80 quarts size of the series. Other sizes are only available in White and Tan colors.

Both brands feature T-Latches which are great for keeping the lid tightly closed, but Cabela’s coolers’ latches have a bottle opener in the middle of the T-Latches, and not only it’s very easy to use and unique it also saves you from paying extra bucks for a bottle opener.

That is not an option for YETI Coolers, you need to buy one separately, check out the YETI Molle Bottle Opener on Amazon.

For those who’re going for boating or extreme outdoor activities, tying down the cooler securely is important, and YETI Tundra Series offers two Tie-Down Slots on each side, with Cabelas Polar Cap Equalizer this is not an option.

But the good thing about Cabelas Cooler’s is you don’t actually need special slots like Yeti Tundra. A huge plus of the handles is you can run a strap around the handles and pull them down with the straps, they hold up just fine when securing that way too.

Cabela’s Polar Cap Equalizer Series features two dolly pin latches at the back and front, so if you want to upgrade your cooler with wheels, it’s very easy.

YETI Tundra series doesn’t feature a dolly pin latch, but that doesn’t mean that you can’t use them with a dolly though, Cabela’s dolly pins just make the securing cooler to the dolly process much easier.

As you can see from the name, Cabela’s Polar Cap Equalizer has a Pressure Equalizer valve. By using this valve, the external pressure and the internal pressure of the refrigerant are equalized and then it is much easier to open the lid.

It’s not a must-have feature if you ask me, but it makes the lid really easy to open.

Last but not least, the sizes, YETI is the clear winner in the size department, it has a much convenient design, and the main reason is Cabela’s coolers’ built-in handles.

They take up plenty of space that is a big con but it’s also important to mention that these handles do make the carrying process easier.